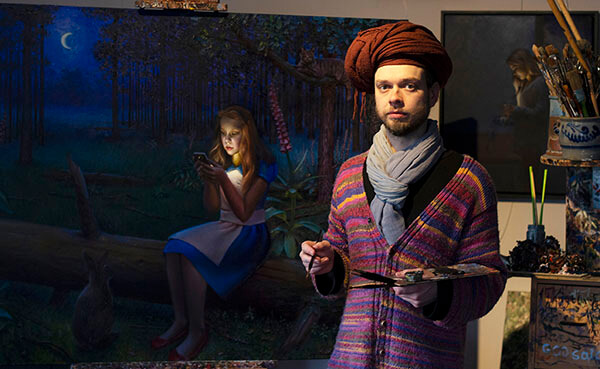 Growing up on the countryside of the Netherlands, Daniel Douglas (Dedemsvaart, 1984) spend his childhood in the landscape that is so famously depicted by the Dutch 17th century painters. Low wide horizons a fierce cloudy skies, the familiar images that he grew up with formed a solid foundation for Douglas’ later work.

Already at a young age it was clear: Daniel wanted to become a painter. After following a preparatory year at the art academy, Douglas did an apprenticeship by artist Maarten Welbergen in 2004. Here he learned the basics of oil painting and proportioning. One year later Douglas moved to Italy to study at the Florence Academy of Art. At this famous art school he studied different classical drawing and painting techniques and learned to observe critically.

Douglas’ style can be described as mostly realistic; his paintings depict everyday scenes, landscapes, still lifes and portraits. In his work the aesthetics of light and nature play an important role. By working in layers Douglas creates a rich composition with deep colours.

“Painting for me is literally a way to make dreams come true. I’m daydreaming, have an image in my head and while I’m working on it, it comes to existence. I can really enjoy this process and I’m happy to share my imagination with the world.”

Since 2012 Douglas is working on his series ‘New Light’, which combines the style of the old masters with artificial lighting sources from our modern age. In this work you can feel the magic atmosphere this light creates. Douglas doesn’t intend to say this new technology is either good or bad, but is showing us the visual effects of modern light, seen by the eye of the artist.

This website uses cookies to improve your experience while you navigate through the website. Out of these cookies, the cookies that are categorized as necessary are stored on your browser as they are essential for the working of basic functionalities of the website. We also use third-party cookies that help us analyze and understand how you use this website. These cookies will be stored in your browser only with your consent. You also have the option to opt-out of these cookies. But opting out of some of these cookies may have an effect on your browsing experience.
Necessary Always Enabled
Necessary cookies are absolutely essential for the website to function properly. This category only includes cookies that ensures basic functionalities and security features of the website. These cookies do not store any personal information.
Non-necessary
Any cookies that may not be particularly necessary for the website to function and is used specifically to collect user personal data via analytics, ads, other embedded contents are termed as non-necessary cookies. It is mandatory to procure user consent prior to running these cookies on your website.
SAVE & ACCEPT